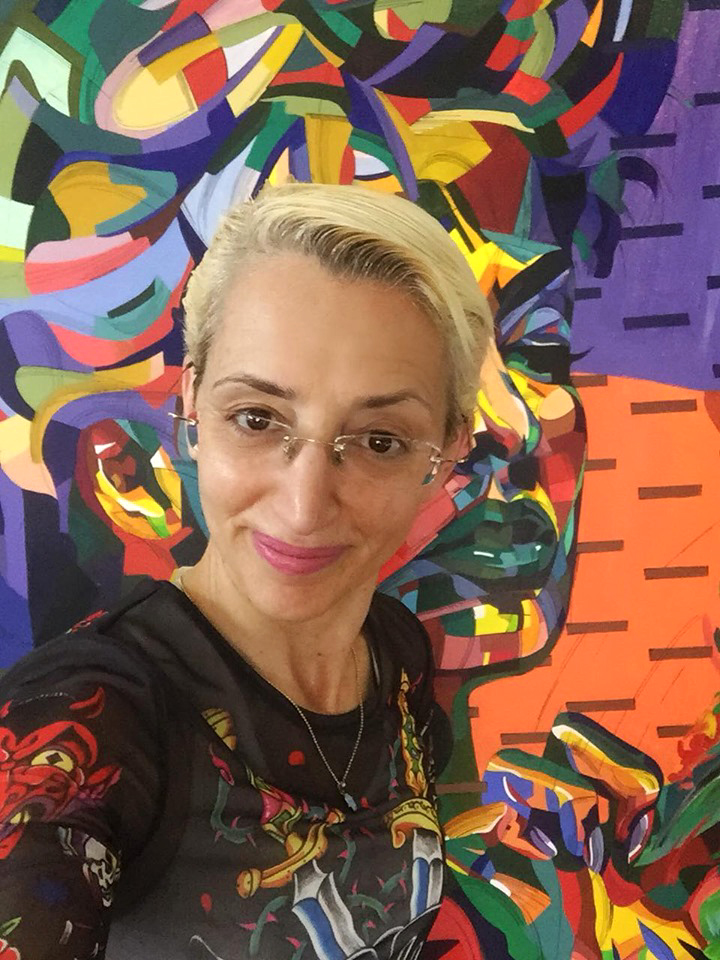 Served several years in the Israeli Air Force as a technical illustrator.
I graduated Graphic and art college, specializing in fine art and calligraphy.
Moving on to study fashion design at the high fashion institute “Shenkar” in the fashion
designing faculty, I developed a passion to illustrate themes from the fashion world, portraits with a unique and fresh approach to the subject, experimenting with
mixed media on paper, canvas, skins and more.
I started working as an art director at a major publishing house where I gained experience as a graphic designer illustrator and a printer lithographer, silk screen.
My work included the full supervision of preparing the artwork for the final print, proofing and operating multiple software and systems.

My first solo show at “Yad Le Banim” in Rishon Le Zion Israel, under the subject of The Ketubah Art, was honored by the mayor for the opening night and featured on national TV.

My artwork ‘Infinite Love’ was chosen to represent “Compassionate Fort Worth”
Texas. Lead Pastor Tim Woody, Rabbi Andrew Bloom and Reverend Charles Robinson. (see picture below)
~~~
I was asked to exhibit my modern art canvases and paper paintings in the designer Broadway (click the link) Macy’s Windows at Herald Square, 5th Ave.
in NYC, which I proudly accepted and was thrilled to be shown at such an exclusive location in NYC.
~~~
Calligraphy and artwork of the Prayer of the State (Birkat Hamedinah) for the Israeli Ambassador to Switzerland. The artwork was created on Calf skin. parchment.  (see picture below)

~~~
My artwork “Crown” was featured on the cover of the UJA Prime Minister’s Rabin mission to Morocco. (see picture below)

~~~
I was awarded the first prize for the design of a logo to mark the 60th anniversary year of the “Jerusalem Post”, out of more than 500 designs submitted by contestants from all around the world.
The logo appeared on every “Jerusalem Post” publication for that anniversary year.
~~~
My Serigraphs ketubah prints were exhibited at the ArtExpo show in NYC, by a major fine art publisher.
~~~
I was featured in a cover story in the Women’s League ‘OUTLOOK’ magazine. (see picture below)
~~~
My fine artworks were featured exclusively in a high quality calendar distributed in Israel and in the USA. (see picture below)
~~~
My Artwork, the “Ahava” ketubah, was featured in the TV series “Fringe” Fox TV Season 2 Episode 14 Titled “The Bishop Revival”
~~~
My Artwork, “Jerusalem” ketubah, was featured in the CBS TV Show “A Touched By An Angel”.
~~~
I was featured exclusively in the Wedding publication of the New Jersey Jewish News.
~~~
I was invited to exhibit my modern artwork at the “Ambassador” gallery in NYC (1994).
~~~
Painted the life size sculpture “The Lion Of Jerusalem” that was represented by Temple NerTamid (NJ) in the Israel Day Parade in New York City. (see picture below)
~~~
Throughout the years I was asked to commission my artwork for many occasions and celebrities, a sample of these are presented here.
Decorated the official certificate for the installation of Rabbi Bakshi Doron. (see picture below)
~~~
The Israel’s chief Sephardic Rabbi. This artwork was signed by the prime minister, government ministers and high rank officials. (see picture below)
~~~
Designed a series of “Shana Tova” for the “Hadassah”” organization, USA. (see picture below)
~~~
Designed Seder plates sets for Major Judaic art manufacturers in USA (sold out). (see picture below)
~~~
Illustrated a line of music covers for Grammy nominated & Parents Choice Award Winner “Club Baby”.(see picture below)
~~~
Numerous original ketubahs commissioned by fine art collectors and celebrities from all around the world.
~~~
My art “Seasons” featured on a book cover written by Rabbi Andrew Bloom.
~~~ 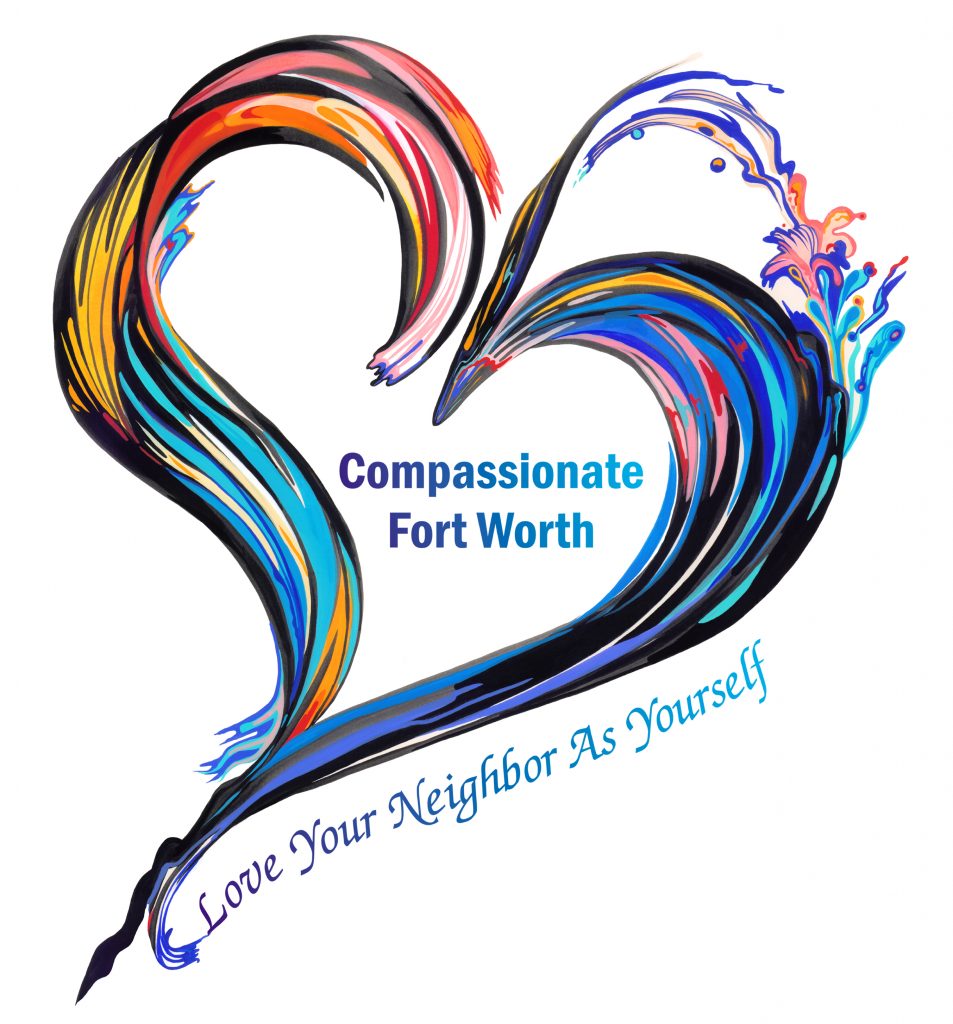 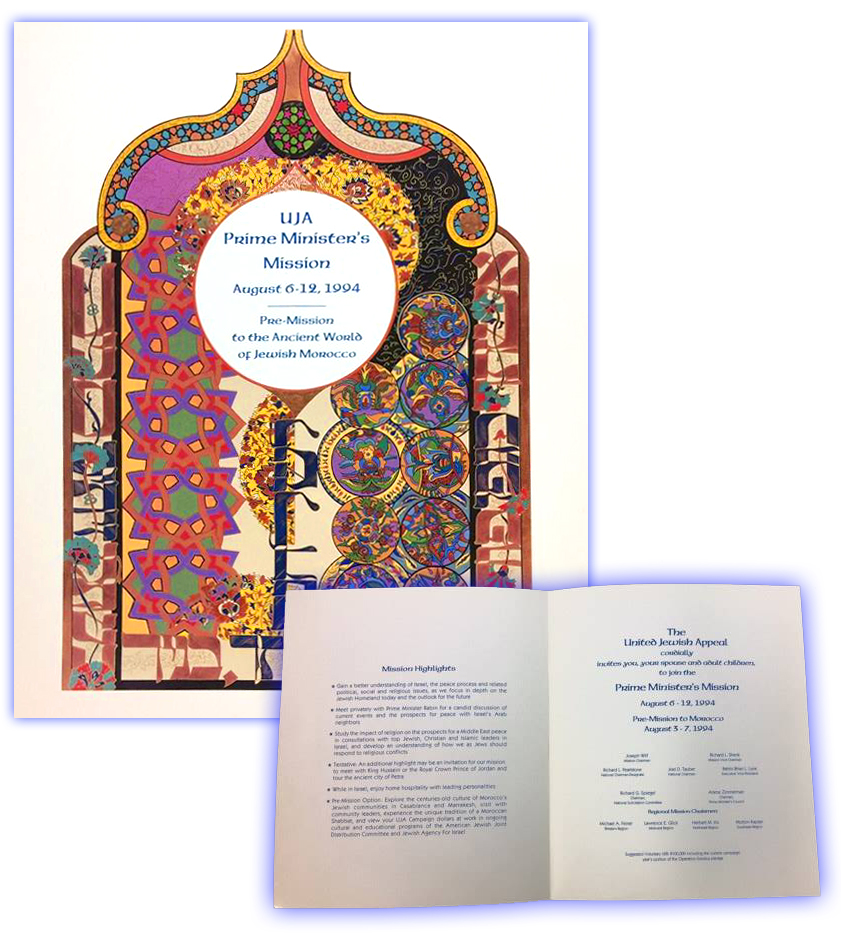 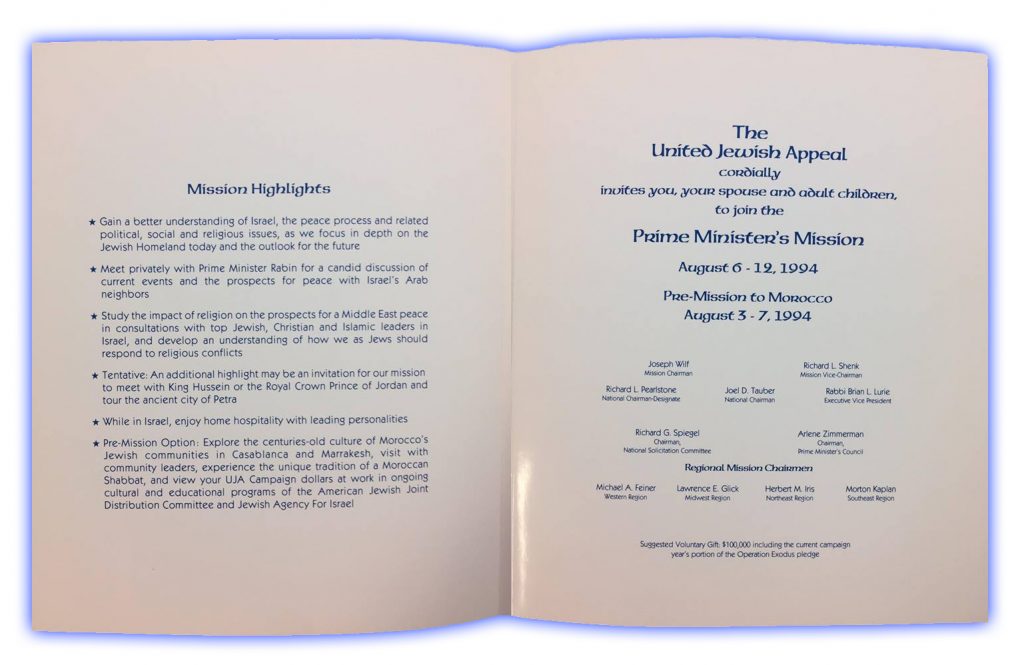 I painted the lifesize sculpture “The Lion Of Jerusalem” that was represented by Temple NerTamid (NJ) in the Israel Day Parade in New York City. Israel-59-years
~~~
From the press:
Temple Ner Tamid was represented in the Israel Day Parade in New York City on Sunday, May 6, by more than 50 marching congregants and one stunningly painted lion. The life-size sculpture was one of 30 Lions of Jerusalem distributed by the UJC of MetroWest to participating synagogues, schools and other organizations throughout New Jersey. 2007 marks the 40th anniversary of the unification of the city of Jerusalem during the Six Day War. The URJ commemorated this milestone with an art project designed to educate people of all ages about Jerusalem and allow communities to demonstrate their connection to Israel. Nava Shoham, a renowned ketubah artist who owns and operates 1800ketubah.com, conceived the design for the lion and oversaw its execution. Temple children painted the sculpture’s base. The main theme of the bold design is Ko’ach, Ozma, strength, which is prominently calligraphed on the lion’s mane. This word declares the strength, identity and values Ner Tamid draws from its ties with Israel and vice versa. Rainbow-colored “flames” in the mane evoke the Temple’s logo: a ner tamid, or eternal light. The lion’s face is outlined with a design that represents the walls of the Old City. The inner face is painted with images of Israel including the Tower of David, David’s harp, the Israeli flag, dove of peace with olive branches, Montifyori windmill as well as the seven species listed in the bible (represents the land of milk and honey-Israel), combining the physical place with biblical and religious themes. Additional Hebrew words flow over the lion’s back, quoting Israeli poems, sayings and songs, including the country’s national anthem, “Hatikvah.” The relationship between Israel and the diaspora manifests itself in song and poetry, the beauty of which is portrayed in the dancing letters of the calligraphy. 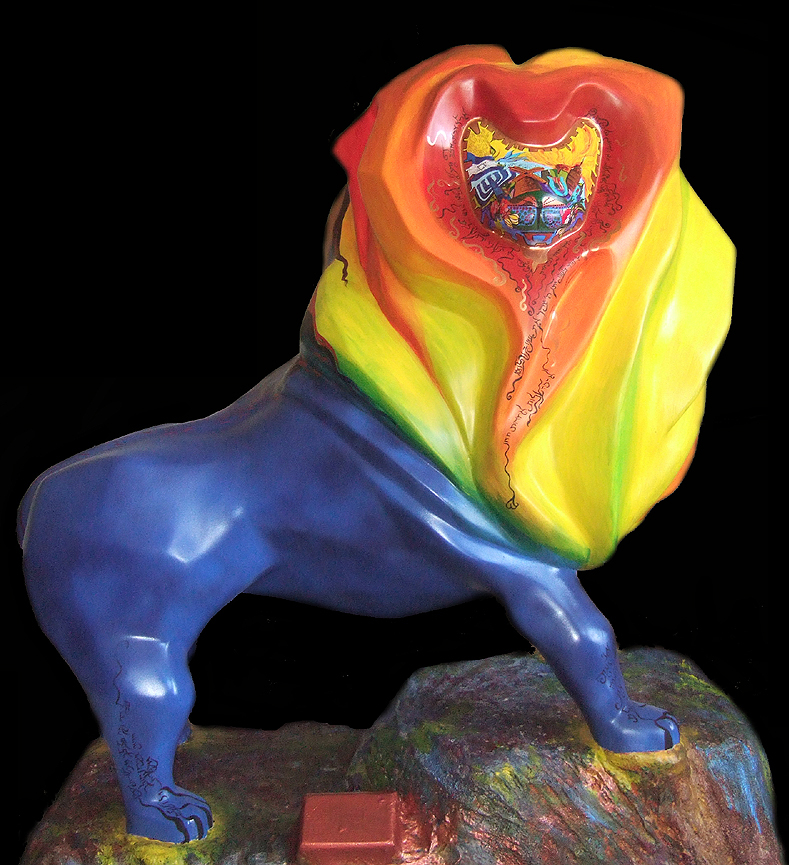 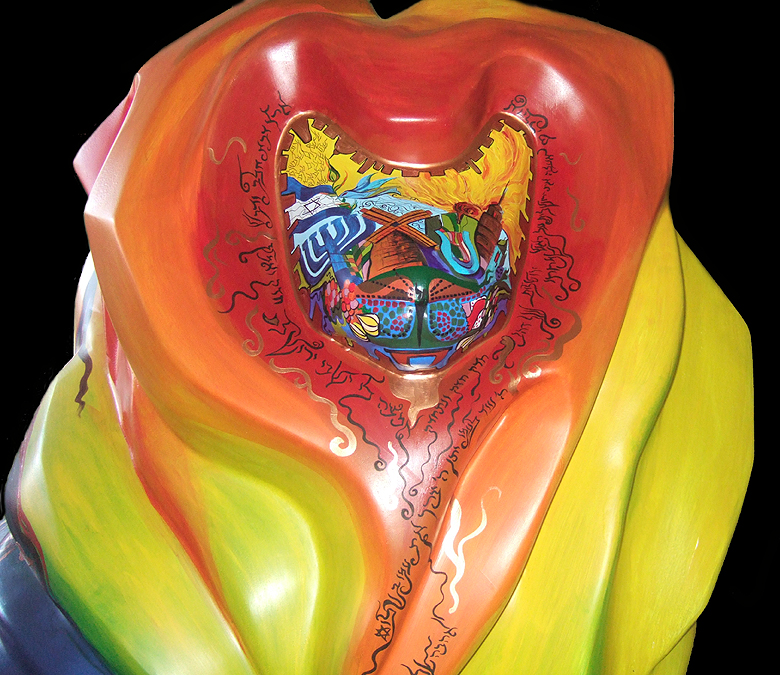 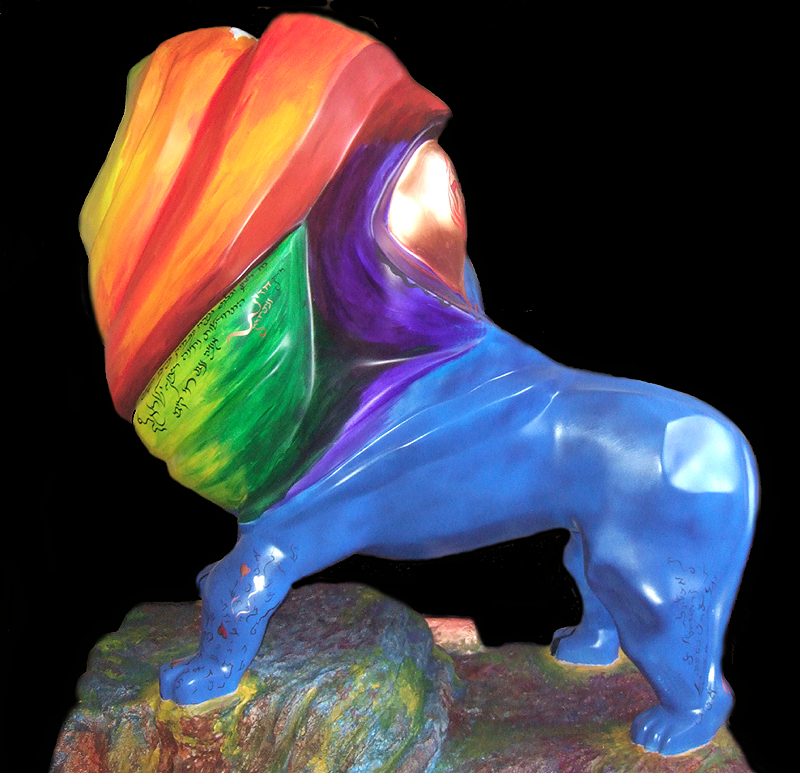 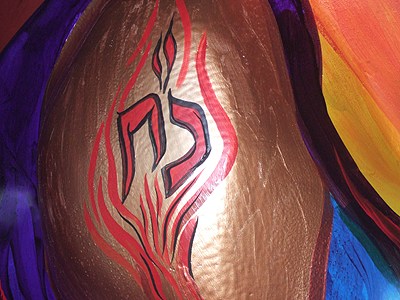 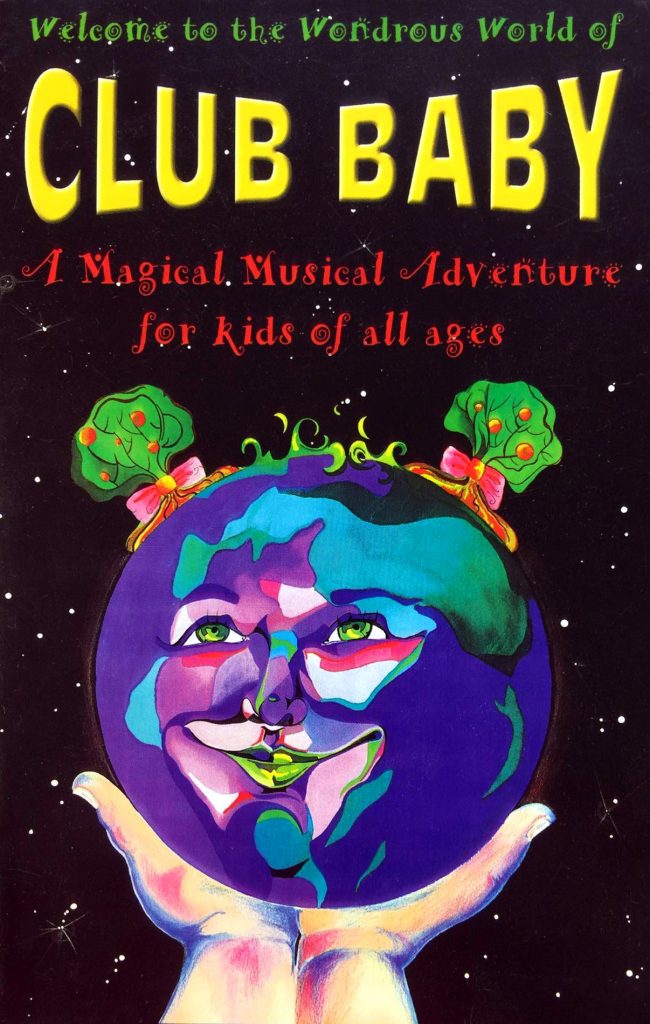 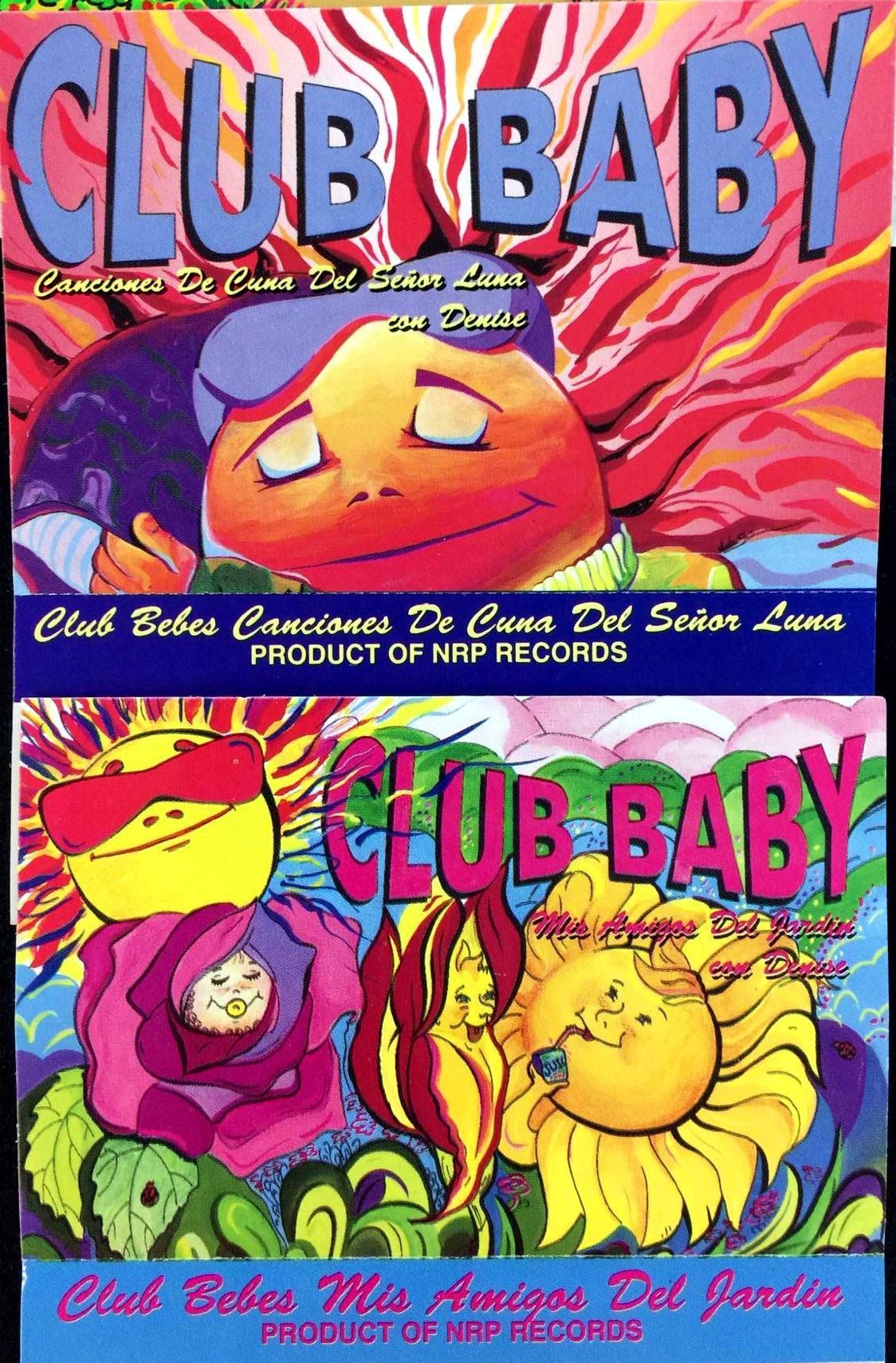 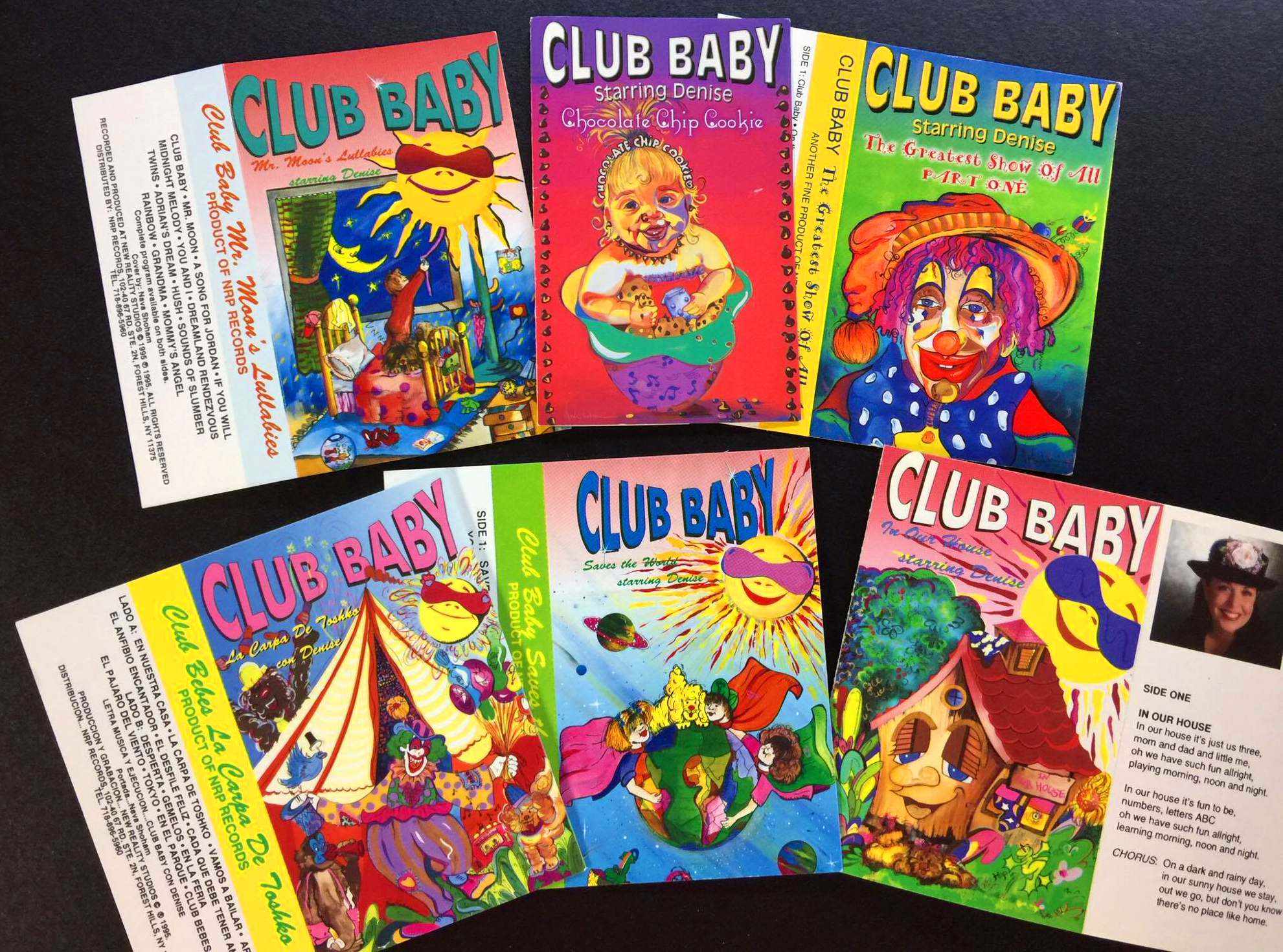 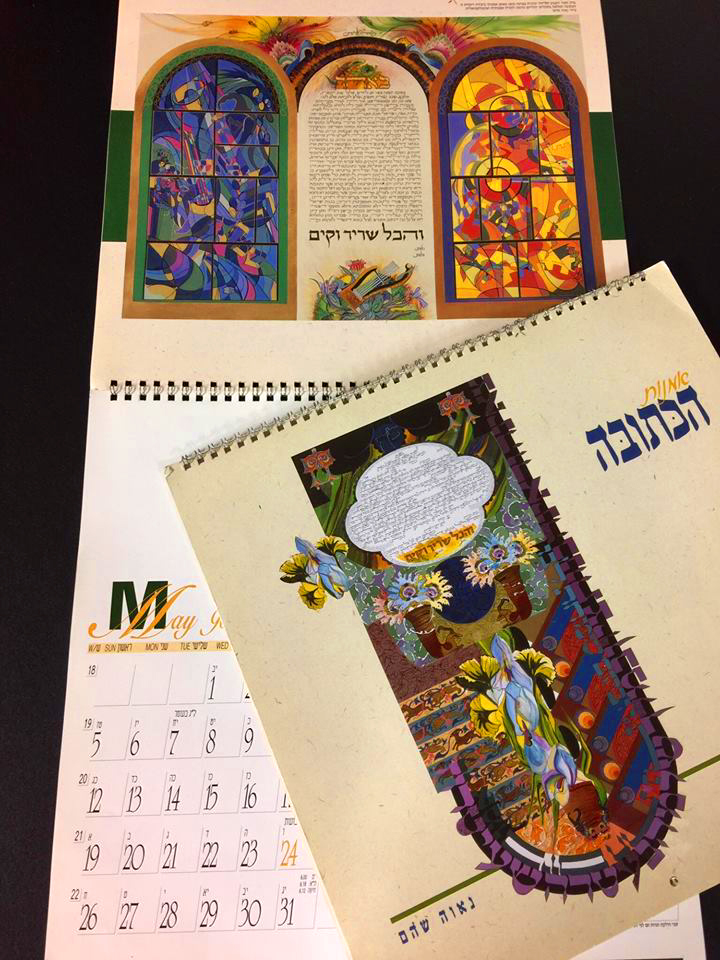 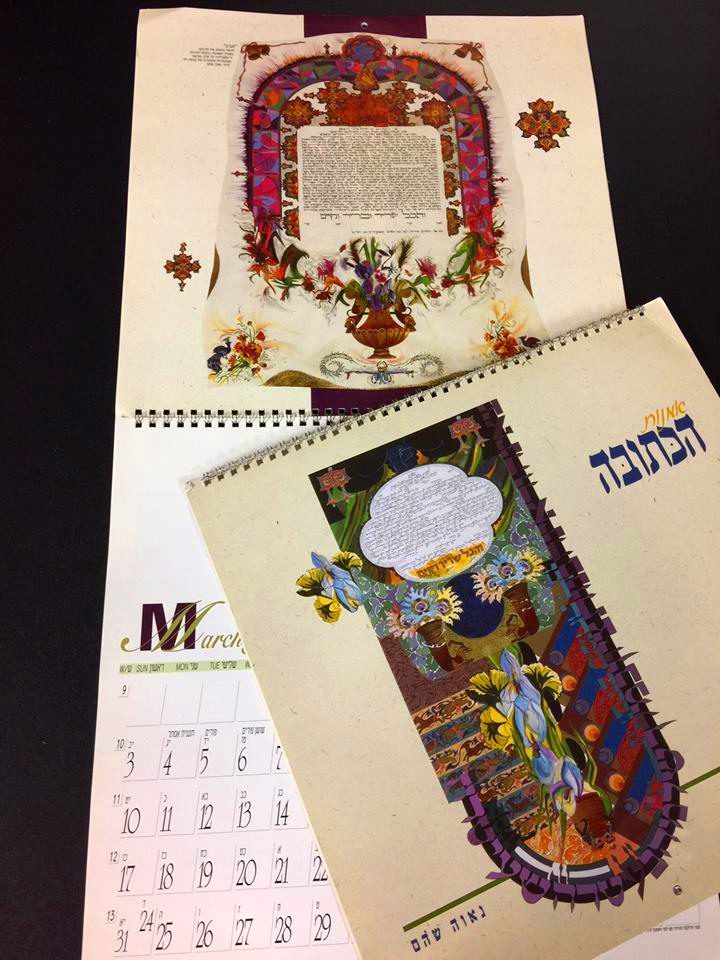 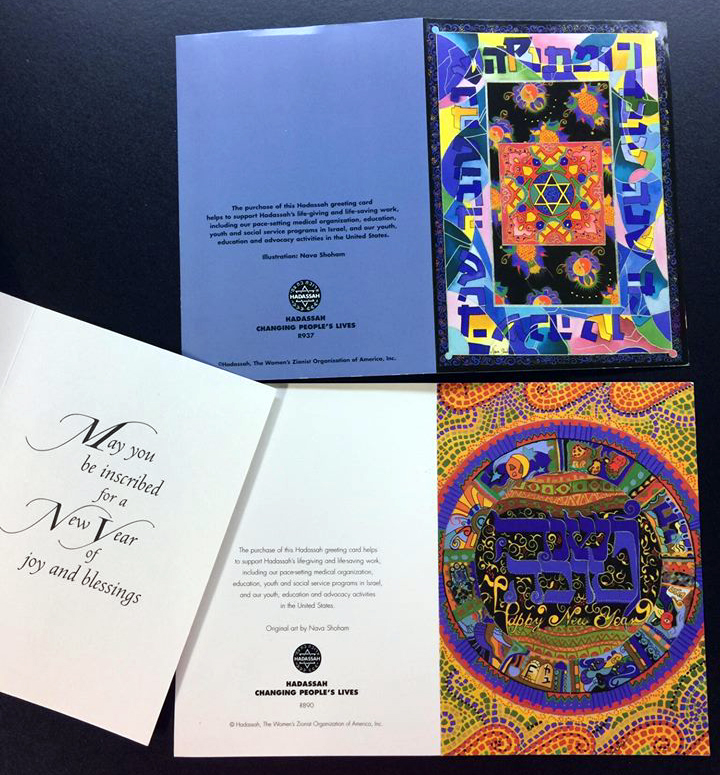 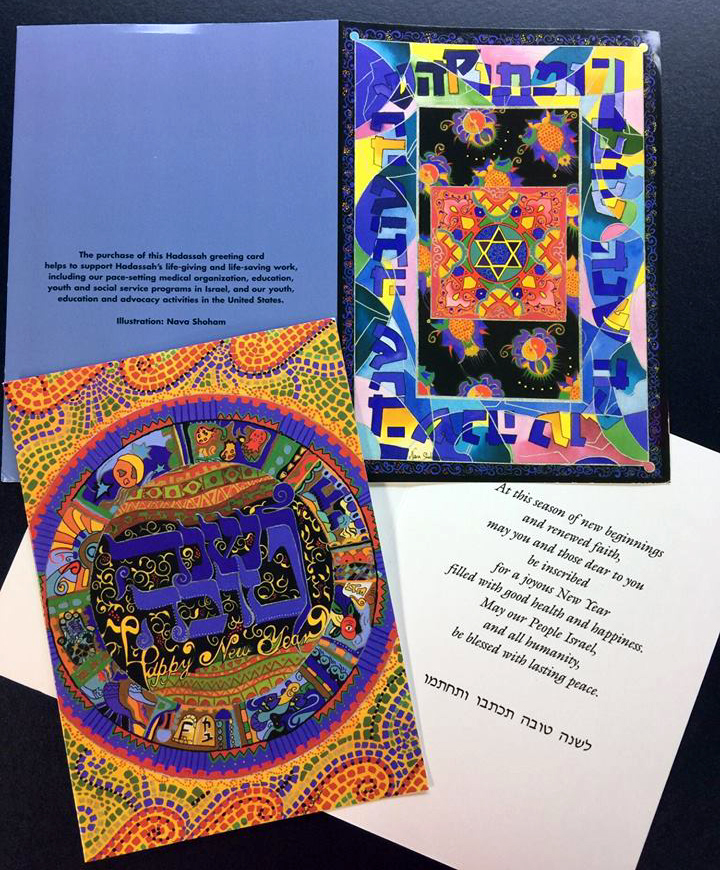 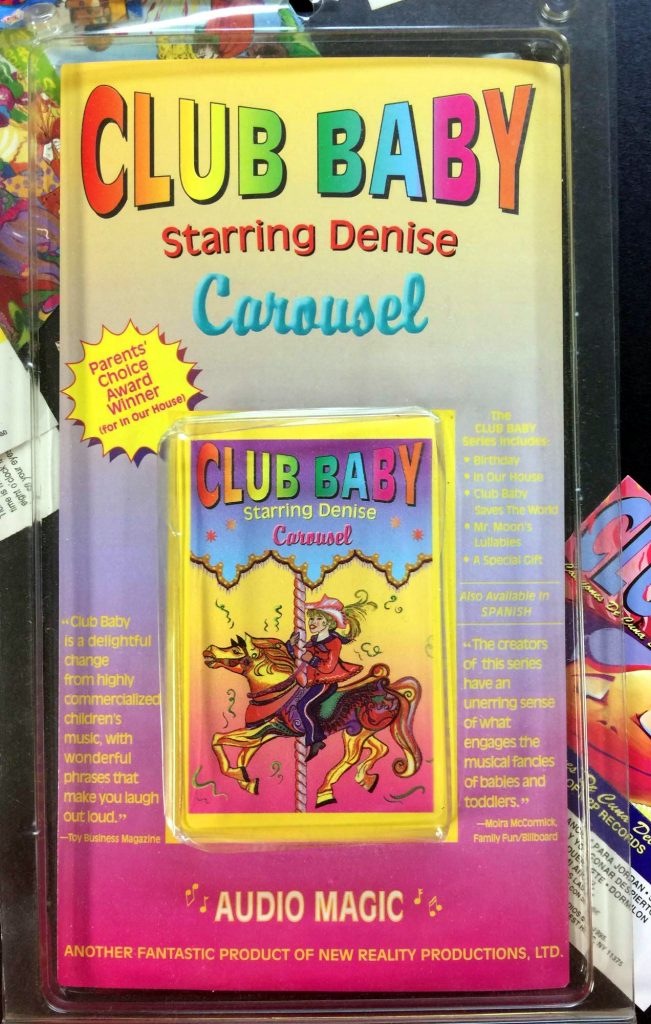 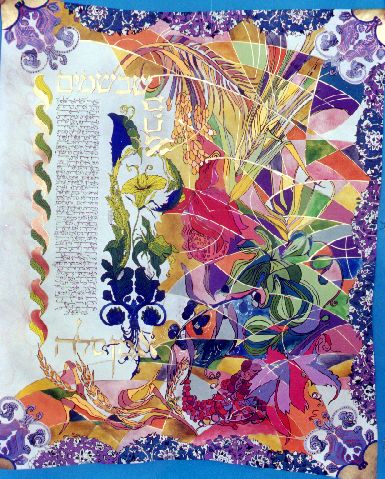 The Prayer of the State (Birkat Hamedinah)
for the Israeli Ambassador to Switzerland.
Calligraphy with a Torah ink, gouache, water colors, pencils,
gold, silver and bronze on calf skin. 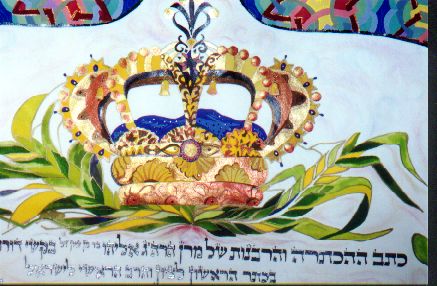 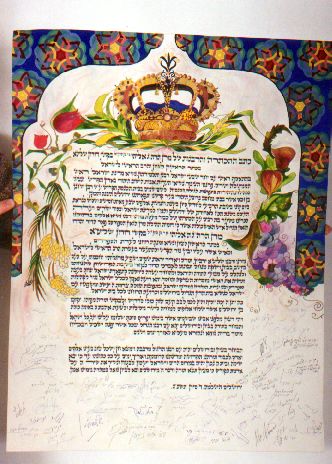 Calligraphy and decorations for “Blessing of the house”  presented to the chief Rabbi in Mexico.
Calligraphy, Torah ink, gouache, water colors, pencils, gold, silver and bronze, cut out on Artist paper. 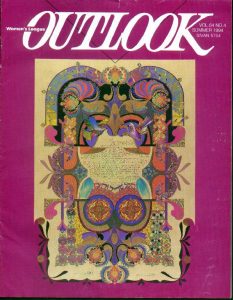 Featured in a cover story in the Woman’s League “OUTLOOK” magazine. 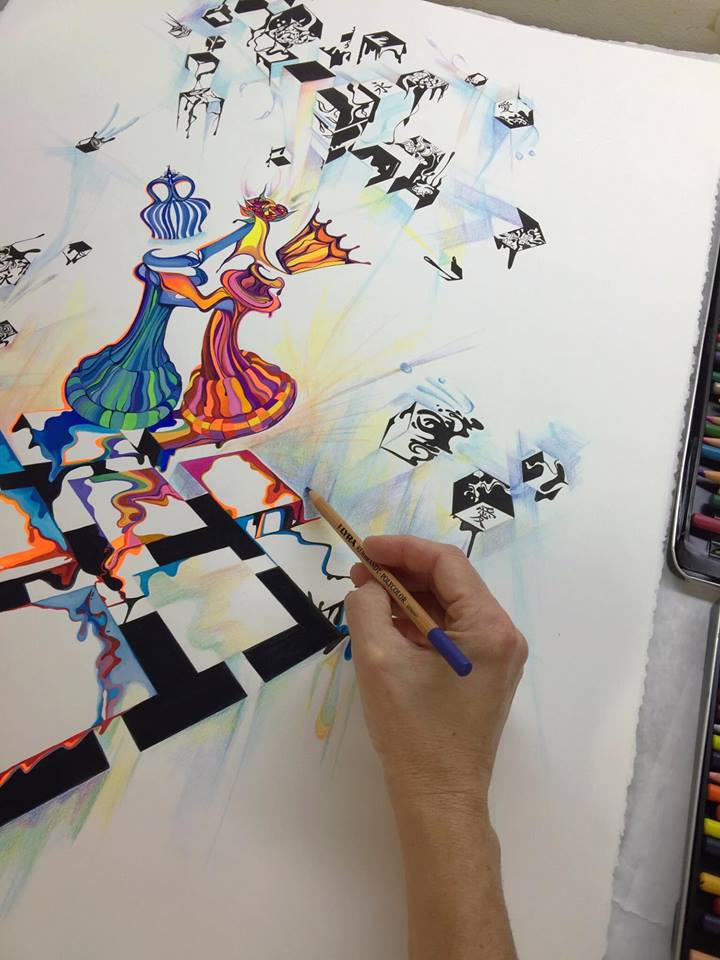 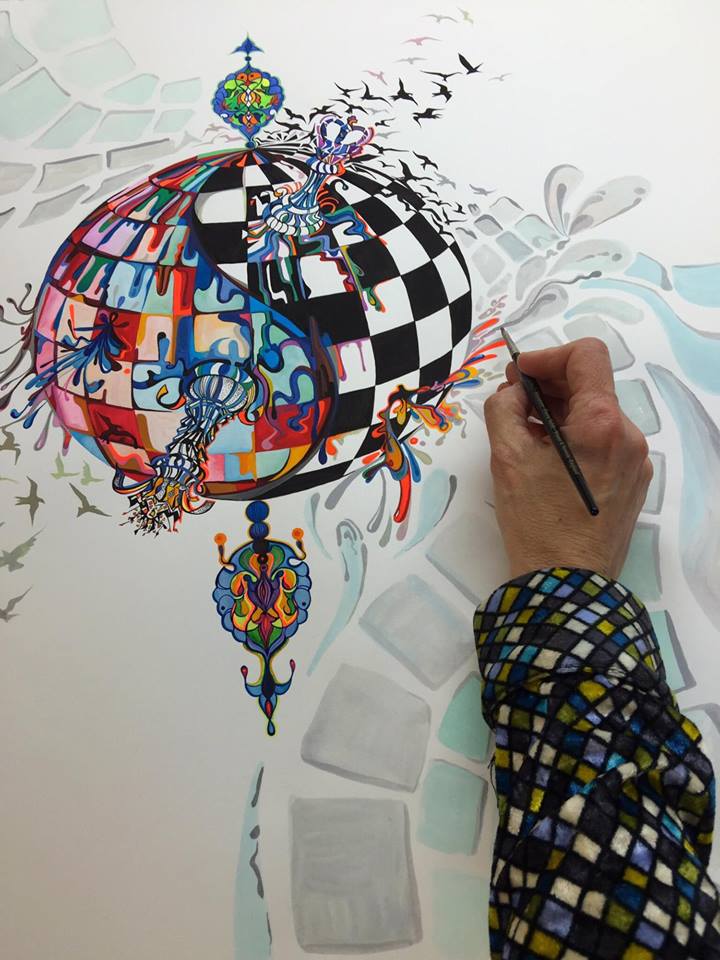 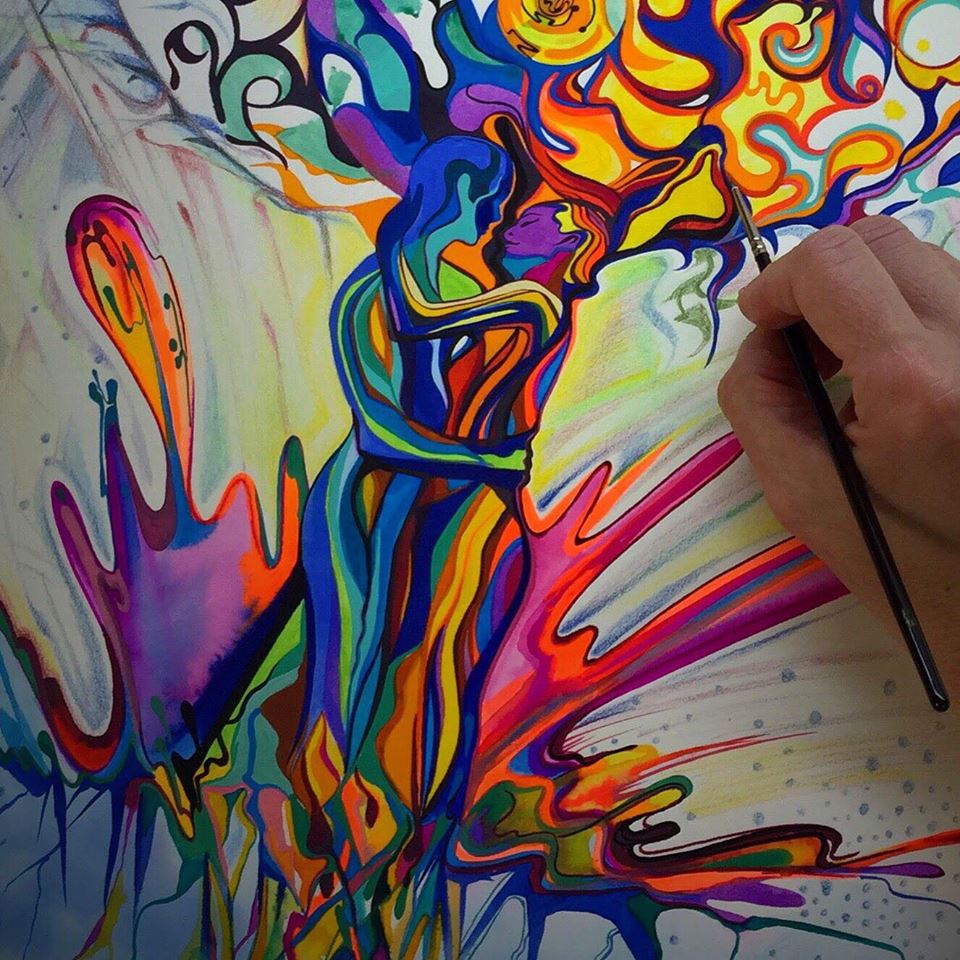 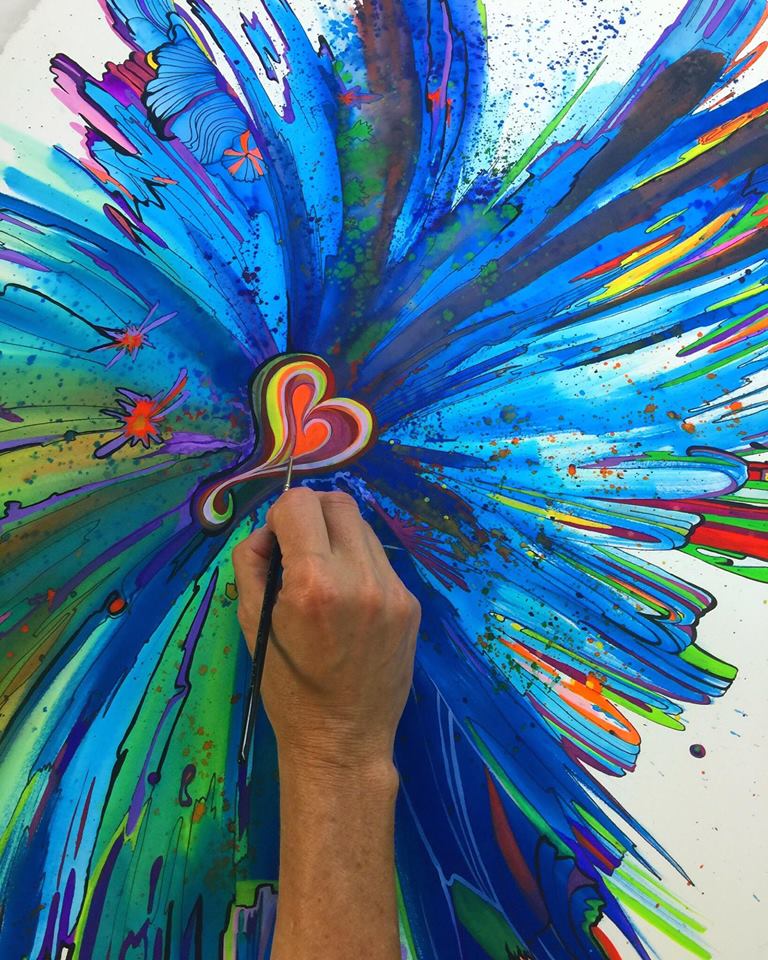 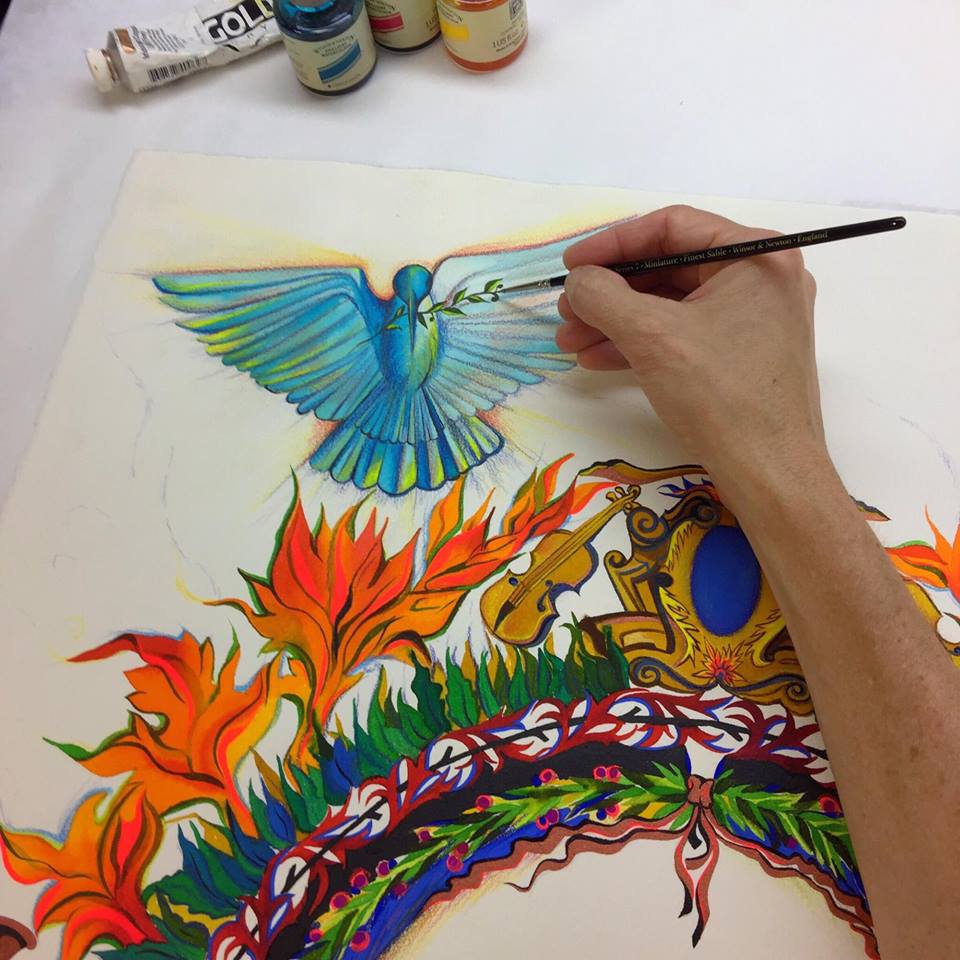 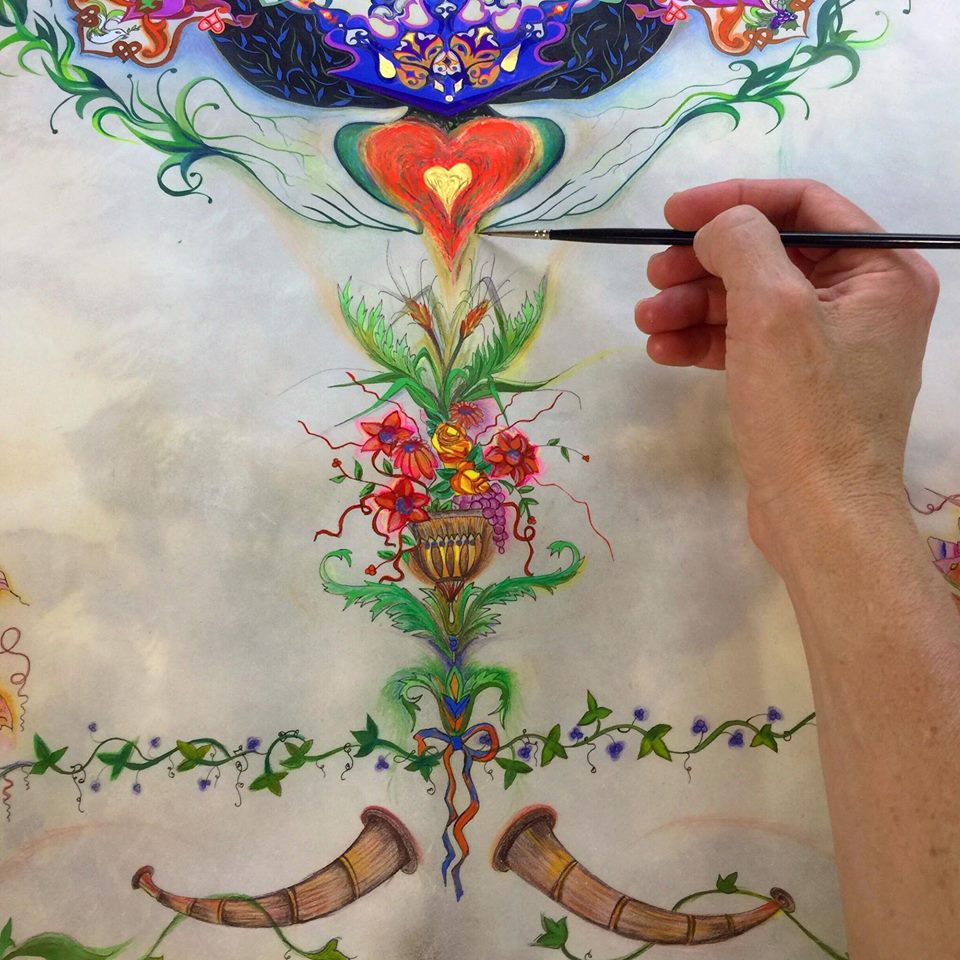 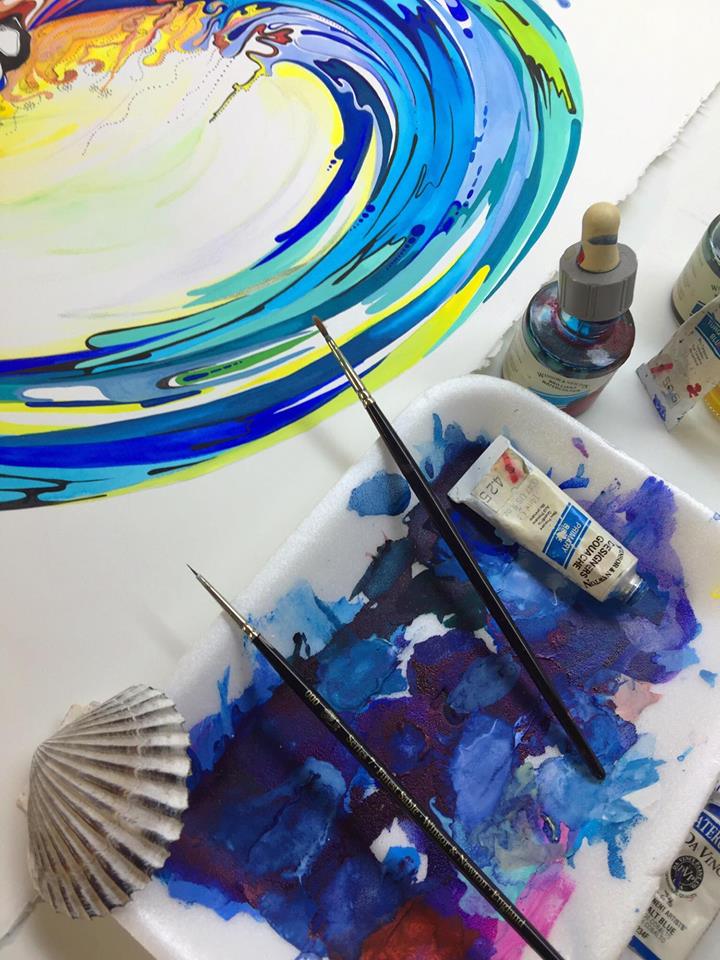 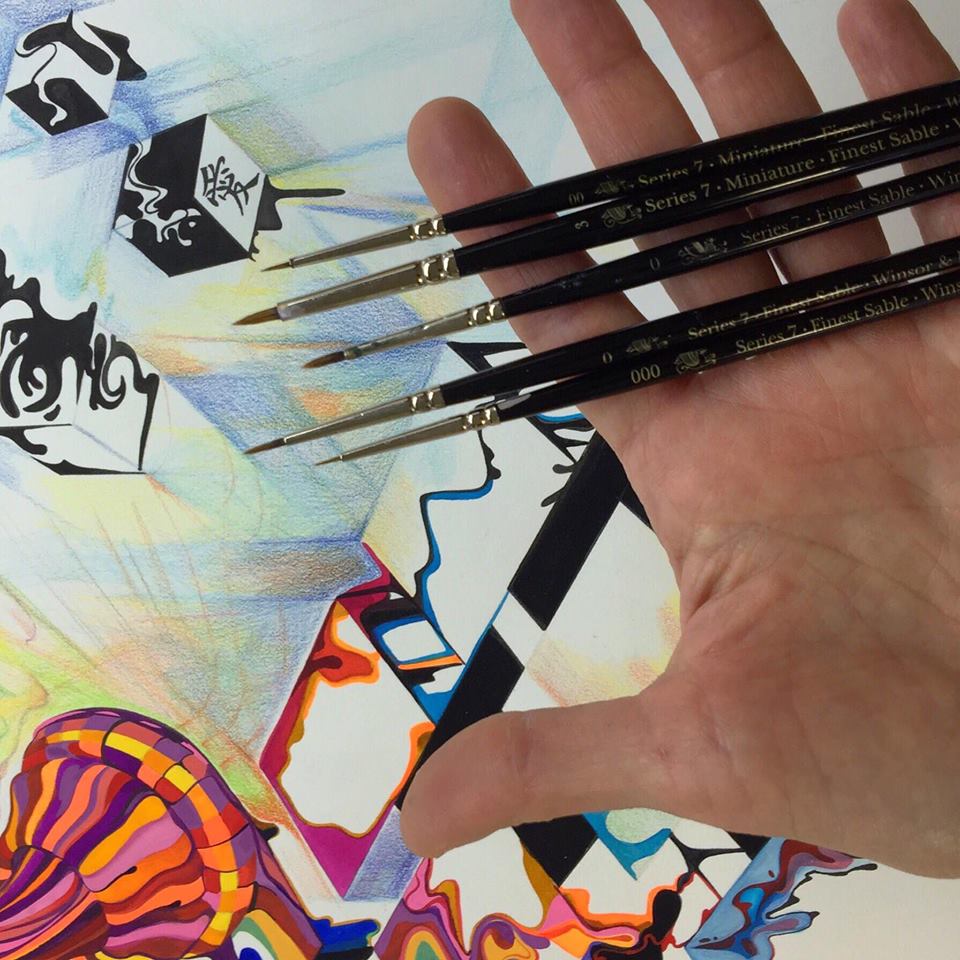 Night at the MET ..where else 🙂 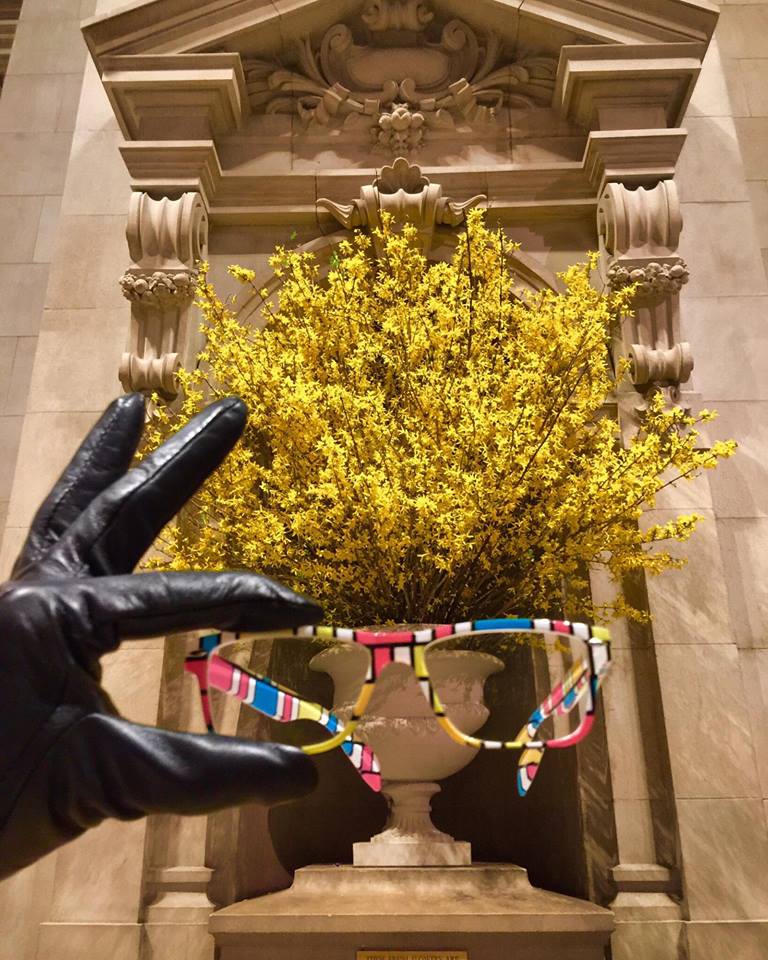 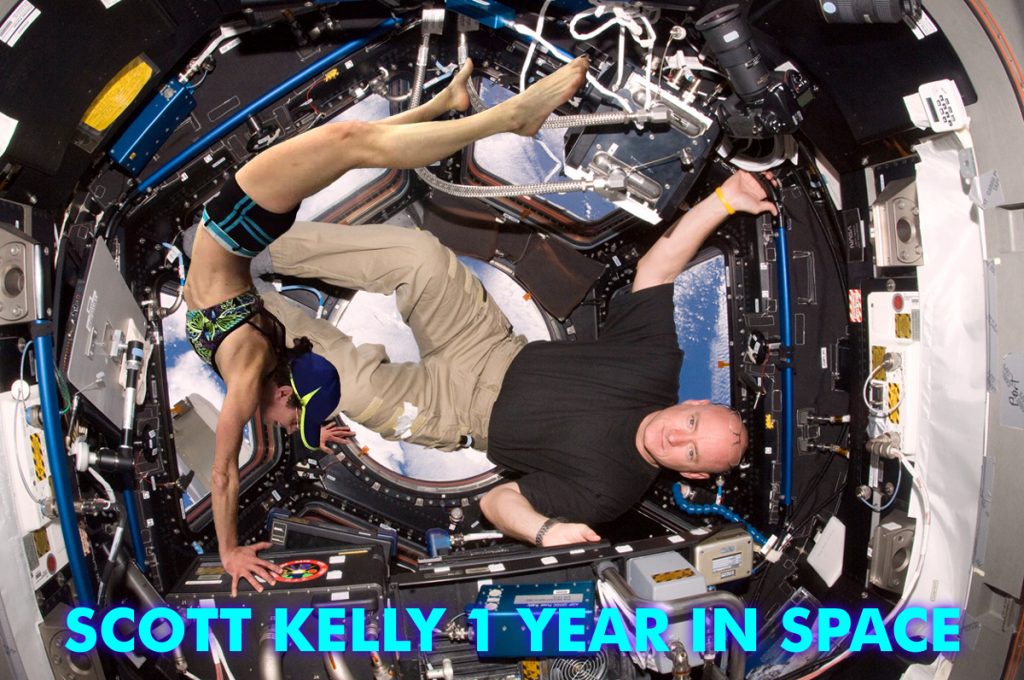